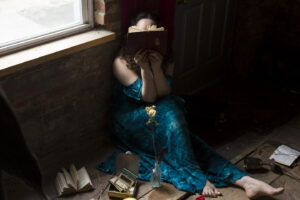 Rachael Sage’s project Poetica gives the term originality a new meaning. With a voice like hers that carries a certain hypnotising power, it leads you deeper and deeper with each sentence. Poetica’s new self-titled album holds 19 tracks, which create connection and shared experience via the unifying power of words.

Not everyone is born with the gift of being well-spoken. For Rachael Sage, the freedom of the spoken word is where she feels most at home. In her work, she uses the elements of jazz tradition to soundtrack her poetry-shaped thoughts.

Sage’s new album ‘Poetica’ seems like an embodiment of every dark, traumatic, light-hearted spirit that has gone through her head. In the process of writing her records, Sage presents what’s important in life. In ‘Unconditional,’ she touches upon the weight of true friendship and love in the search for the light at the end of a very dark tunnel. Essentially, unconditional love triumphs all.

Rachael Sage faces the same hurdles of current existence. In ‘Beginning,’ she battles with the nonstop wanting more and tirelessly looking for validation. Despite the evident frustration, she also appears to be in terms with it.

Love is the muse of all art forms, whether it is unrequited love, twin flames, or a broken heart. Love is the answer. ‘Butterflies’ depicts the inspiring elements of longing for someone and still admiring the beauty in the cracks of a broken heart.

Rachael Sage’s impact goes beyond her musical talents. Rachael is none other than our latest partner. Beatfreeks has always had young people’s creativity at its heart, something which resonated with Rachael when we spoke with her.

Rachael says, “I am delighted to have been asked to be an ambassador for Beatfreeks, who are doing exceptional work enabling diverse youth to have their voices heard in creative as well as corporate spaces.”

She continues: “The origins of Beatfreeks and focus on spoken word and poetry as a way to bring the young community together is so moving to me because it also reminds me of my early days in NYC’s East Village, where I would regularly attend open mics, debut new songs and poems in a shaky voice that gradually became more confident, nurtured by the mutual support among my peers.”

Going from humble beginnings to now owning and running her own record label, releasing new music all the time; it’s an inspirational sight to see Poetica now released. We hope you gather inspiration from this album, as well as Sage’s career trajectory – knowing that with hard work and creativity, anything is possible.