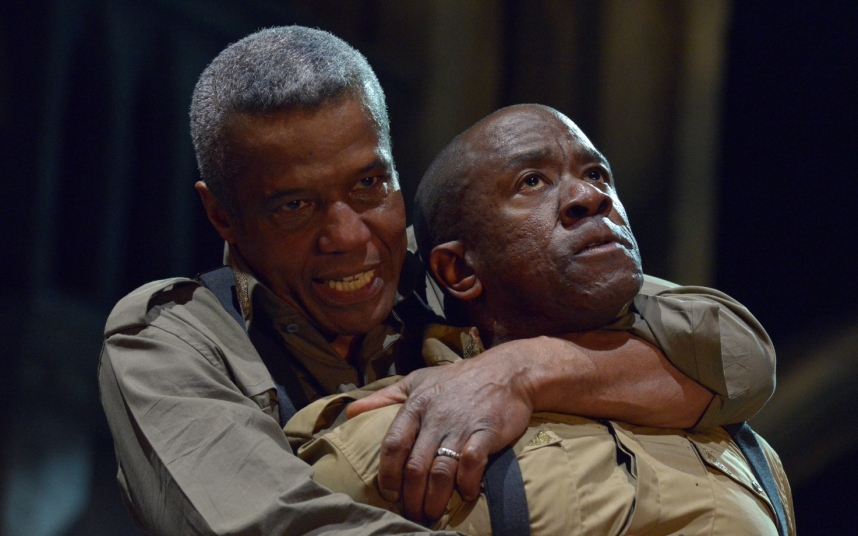 We decided to take a trip down to Stratford for the day which ended, as only a day in Shakespeare’s hometown should, with us attending the Press Night of the RSC’s latest production of Othello, thank you RSC! This is what we thought of Iqbal Khan’s Othello.

“The set gave great insight and a realistic representation into architectural designs during the era. I feel as though this element of production played just as important a role as other factors because it was executed and captured so well.” – Aliyah Denton

From the moment we walked into the theatre, many of us for the first time at this particular RSC, the atmosphere felt incredibly inspiring. When we wandered up to our seats in the upper circle and circle gasping and commenting on the stage as being “magical”, “mindblowing”, “Arabesque” and “spot on”. The imminent transformation of the set left us all owe-stuck. Being the opinionated bunch we are, here are most of our views of the production.

“The staging and acting was excellent!  Ayesha as Emila stood out especially in her final scenes.” – Bradley

*Claps* Well done to Ayesha whose last scene was so emotionally powerful it had us all chatting on the way out!

“The show was amazing. The arabesque influences of the set and sheer amount of culture exhibited, from the playing of the athaan in the early morning scene to the Hip-Hop influences in the party scene, all helped to adapt Shakespeare to a modern day audience whilst also ensuring that is was an engaging experience.” – Amerah

The cultures exhibited throughout and weaved within the play gave it an intercultural feel, that I believe plays on the ambiguity of Shakespeare’s stage directions but also on his ignorance as an untraveled playwright. Shakespeare, having never been abroad, had to work with these characters and places from mere anecdotes and imagination.

Cottoning on this, what Khan has done with the RSC’s latest production, is breath life into those ambiguous narratives but with the knowledge of multiple cultures that comes with living in modern day Britain. A Britain where themes of race, love and duty are as prevalent and important as they were in the Elizabethan and Jacobean period. In other words, I really enjoyed how the play was more intercultural than multicultural.

In summary, “Shakespeare’s work can often feel miles away from contemporary art, what Iqbal Khan did quite cleverly was find little hooks throughout that enabled us to connect it to the modern day, for example hip hop cyphers within the context of Elizabethan Othello. Scenes of torture that weren’t so different from scenes we see on the news. Iqbal’s Othello was not escapism but a narrative placed across a range of contexts.” – Alisha

Oh and the music! I was lucky enough to be sitting near one part of the live bands and their power to instantly change the mood and tempo of the scene was well played and had me bopping at times, the vast array of international instruments also added to the intercultural exchange.

“Huw, is clearly a very experienced actor which came across as he give Othello a more natural behaviour than the dramatics of Shakespeare’s original character. The transition from his strength to his destruction felt more human. It was more measured.” – Alisha

Taking this into account, I found the contrast in Desdemona’s character an interesting balance. As I had often interpreted Othello and Desdemona as timid and overly love struck. However this version of Othello, as Alisha said, made the love between them seem more human and Desdemona bolder that initially envisioned.

“The story was focused more on how people reacted to inter-racial marriages due to the casting. It was less about his race more about the fact that he’d married a white woman.”– Leadh

This made it even harder to stomach the derogatory imagery and language used by Iago when constantly referring to his hatred of “The Moor”, because it felt a lot less about race, Iago’s comments always seemed to bring you back to reality.

THE CASTING OF IAGO

“The play was a powerful re-imagining of the script. I think Iago being a Black man was interesting but you had a lot of people who hadn’t read Othello, who were left confused at the casting decision. However, it brought out the under layers of hatred, not stuck on racism as an issue but challenging the cultural differences within race. His motives seemed lacking, because his without his racism he just seemed an sociopathic character.” – Lexi

I completely agree with Lexi’s comment but believed the casting of Lucian as Iago was a bold decision that challenged our contemporary perceptions of intolerance and prejudice. It personally brought the idea of colourism to my mind which I believe added to the conversation of not homogenising or categorizing people as the same due to race or aesthetics.

Plus Lucian played the character of Iago phenomenally throughout, which just goes to show that actors chosen based on ability and what they can give to the role over a set ethnicity or race can be far more powerful than simply following racial convention. #IdrisElbaForJamesBond

The play was a genuine success in terms of sustaining and animating the storyline and script, despite being roughly 3 hours long, this is partially due to the ever changing set, boldness of Iago and modern references to keep you on your toes.

“There were points where the clash of cultural references confused me slightly.”– Alisha

The first scene where technology was highly committed to with the TV broadcast and busy Generals with earpieces issuing orders, just seemed odd and ill placed especially with the fading out of contemporary twists in the second half.

“I didn’t agree with the need of modernisation for parts of the production – Bradley, but this aspect was well utilised in some situations, namely the part scene in Cyprus that incorporated a rap battle and later escalated into a brawl.

The majority of the play not only challenges Shakespeare’s original script but also gives us some serious social issues to consider and deliberate, from colourism to domestic violence. I think it is truly an interpretation of Othello that I’d advise everyone to go and watch and craft their own opinions on.  This is definitely an important play with emphasis placed in the right areas to inspire and differentiate.

When you do see it, be sure to let us know your thoughts, we’re nosey you see 🙂

Also thank you to Iqbal for taking the time to talk with us after the show and thanks to the RSC Marketing team for helping to make this happen on Beatfreeks 2nd Anniversary!