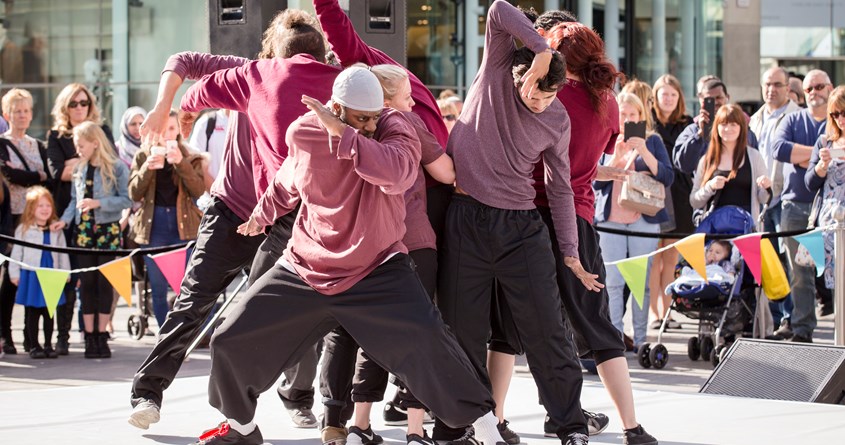 As we get closer to the Birmingham Weekender we’re getting more and more excited, not only for the Culture Catwalk stage, but also the entire festival. We attended a Volunteer training session earlier this month and got to know some of the lovely team behind the entire festival including Executive Producer, Caroline Davis, who shared all of the secrets and joys of the festival. Here is what she had to say:

What’s your favourite thing about being Executive Producer for the Birmingham Weekender?

I get to be involved in a little bit of everything. I’ve been involved in some of the programming decisions, raising the sponsorship, training volunteers all the way through to helping with marketing decisions. I’ve always enjoyed the breadth of the role. That’s the thing I love about Weekender as well, it’s multi art-form, I love that sense of being everywhere.

What are you most excited about?

I will definitely be hanging out with Square Dance. I’m also really looking forward to Mette Sterre’s walkabout act Hummelmania, she’ll be performing 4 times over the weekend with her elastic band suits which I just think people in Birmingham will think is wonderful and bizarre. I’ve worked a lot with the CBSO and I think it is going to be great. I helped put them in the station when Jonathan Bloxham was conducting a surprise concert and I think it’s going to be really interesting to see the full orchestra there in a big public space this time with Myrga conducting a very different programme to last time. I like these big events that are happening for free in public spaces.  But, if I was buying a ticket for anything in the Weekender I would be buying Outbox Theatre’s production of As a Tiger In the Jungle at Birmingham Repertory Theatre because it is a new piece of work that has been devised with Nepalese performers and a Norwegian circus company and it premieres as part of Weekender and I think that’s a really exciting addition.

How is Birmingham Weekender different from the 2015 festival?

In some ways it is very similar in terms of scale and ambition and the way we have put the programme together. I think that we have moved the programme on; we’ve got interesting talks, more international work including India, Pakistan and Bangladesh. I think that it has been great to use the building blocks from last time, for instance, allowing young (Southside) producers to have more involvement and longer time to produce the Culture Catwalk stage which is going to be super fun over the two days! I’m excited for this year – but it has been harder work!

Why is the Birmingham Weekender important for the city?

It is important for the city because it is showcasing the talent of our individual artists and our diverse talent and putting them on a platform with international artists that we’ve invited to the city. It’s everyone performing together. It’s household names like Craig Charles, it is big international companies, spectacle shows like Clash of Drums metres away from young people that are a part of our community and parade, saddled up to new interesting commissions like those part of our Alternative Village Fete. It is important that we sell that image of our city, particularly if we are to show for things like the Commonwealth Games that we are able to sustain outdoor events that bring people together.

What does #BeingABrummie mean to you?

It means being me!

There you have it, a lot of excitement and pride for the Weekender. What is most exciting is the fact that a lot of work has gone into the production to make sure that the Weekender and the Culture Catwalk stage is as ready as it can be to fully represent Brum during the Biggest Arts Festival in the city!

Here are four additional events that we recommend you come along too:

1.     Can Culture Change the World? Friday 22- Sunday 24. A brand new discussion series that brings local and academic communities into conversation with the cultural sector.

2.     Trevor Pitt presents: Fluid Festival at Minerva works. Saturday 23 3-11.30pm A festival of Queer sound and music featuring an extraordinary line up of composers and experimental electronic musicians including the lovely Rebecca Ubuntu!

4.     Art Aboard Ikon’s Slow Boat Sunday 24 – 12-4 pm, moored between Brindley Place and the Mailbox, get hands on with creative activities presented by members of Ikon’s Youth programme.

Southside Producers are a collective of young emerging producers aged 16 – 25 formed by a partnership between Beatfreeks and The Old Rep.